What Is a RAID Array, and Do You Need One?

Sometimes you need more failsafes for protecting your business's valuable data. Sometimes you need speedier access to data stored on your company hard drives. Sometimes what you really want is a combination of both. You'll be happy to learn that a technology known as RAID can help you in any of these circumstances. If your awareness of the term RAID is limited to the world of insecticides, you'll want to check out this introduction to RAID arrays from your friends here at Gravity Systems.

RAID stands for “Redundant Array of Independent Disks.” A RAID array consists of 2 or more hard disks that support each other's function in a couple of different ways. There are actually several different types of RAID arrays, each of which offers certain advantages. The most basic form, RAID 0, doesn't really provide redundancy at all; it simply “stripes” incoming data across both of its disks, with half the data landing on one disk and the other half going to the other. If one disk fails, the other disk's data is useless. However, RAID 0 striping gives you extremely speedy data access at lower cost than other forms of RAID. 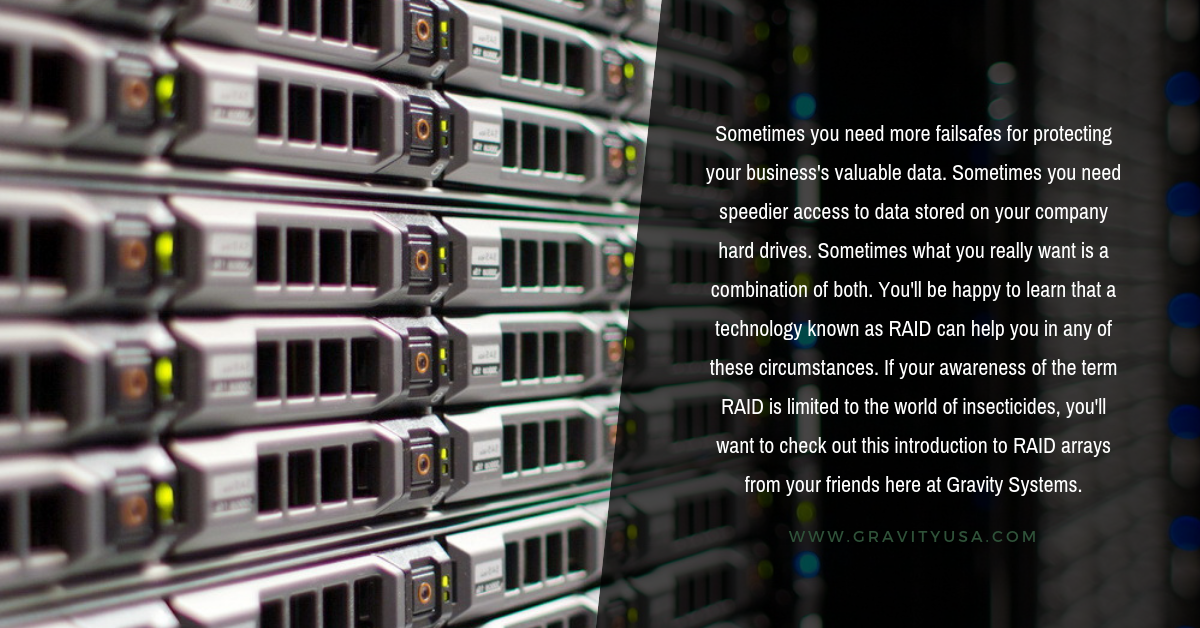 Once you get into other forms of RAID, you start benefiting from redundancy. RAID 1 mirrors (duplicates) data onto pairs of drives so you can keep working even with a total failure of one drive, although half of your data capacity is tied up in making this possible. If you want the best of both worlds – speed and redundancy, consider RAID 5. A RAID 5 array can read/write data over multiple discs for reasonable speedy performance. But it also creates a compressed form of data called parity data that can restore larger data that gets lost or damaged. Other RAID types include RAID10, RAID6, and RAID50.

Want to learn more about RAID? Ask our Austin IT support team!